What color are Zack Fair Eyes

Oh Sangwoo is the second Main Character of Killing Stalking, the primary antagonist.

He has a lean build. His hair is a light shade of brown with a black undercut. He also has what appear to be notable bags under his eyes. 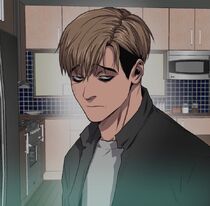 In public, he adopts a "happy, energetic" face and is shown to be often smiling, even when making eye-contact with strangers in social surroundings. During his time in the university, he appears to be an extroverted person with a large circle of friends. According to Bum, he attracted many with his "empathetic, considerate, gentle aura". These traits, however, mask his true psychopathic, violent and sadistic characteristics. Sangwoo is actually a cruel and ruthless individual who kidnaps, abuses, tortures, rapes and kill people, showing absolutely no mercy to his victims, that, he's totally fine with beating and torturing his victims, even if they're female and / or pleading for their life, not feeling remorse for any of his actions.

A sadistic sociopath who takes pleasure from another human's pain, he's highly narcissistic and looks down on everyone, pretending that he actually cares for others, only to strike them with honest hostility when he feels like it. His emotions, when facing his victims, alternate unpredictably between fake mercy and violent hostility. When speaking to established acquaintances, he teases them in a light-hearted tone, and isn't above making better acquaintances with strangers by doing so. Around his victims, he utilizes demeaning, harsh expletives, berating them with slurs. He tortures his victims slowly, yet with a certain pace, selecting to also manipulatively coddle them with simpering words and conduct before returning to his brutality. He favors female victims, though is not hesitant about males either, despite having not murdered a man since his father's death in high school.

He is also a vituperative rapist. Despite the fact that he stated that he doesn't get off guys screaming, he raped Bum three times over the course of the story.

Hating women, he is a Misogynist, and is shown in the story and confirmed by the Author to be heterosexual. He despises gay people, being homophobic to Kim Seokho who he brutally murdered.

Sangwoo grew up as a child with an strict, negligent father, but caring and submissive mother. He and his mother were forced to eat with a small wooden table on the ground while his father ate at the table. His father frequently beat his mother, while she protected his son and showered him with affection. This is what largely made Sangwoo the way he is today. Although his mother has been shown to provide a level of comfort for Sangwoo during his childhood, his mother is also shown to show signs of mental instability. His mother would relief the stress by having affairs with other men and on one known instance, suffocating and possibly attempting to kill Sangwoo when he was a toddler (Possibly due to her getting Postpartum Depression after Sangwoo's birth). Three years ago, while he was in high school, his parents were both murdered. This was investigated by Officer Park, from which he then made acquaintance with. However, the case proved to be unsolvable, with Park comparing the case to being as though "committed by a ghost". Yang Seungbae, upon later investigation, remarks on the case's perpetrator's evidence to be seemingly planted and all-too perfect. It is implied, through memories, that Sangwoo was responsible for the death of his parents.

Sangwoo is first seen in several flashbacks from the mind of Bum, and is later seen in-person accompanying a female when he is approached by a police car, where he greets Officer Park and Yang Seungbae. After engaging in small talk with Park, he remarks on the new face beside him, and asks where Junjae is. He then introduces himself to Seungbae before momentarily peering down at him in a looming manner. He drops the intimidating atmosphere by joking about Park's athlete's foot. Park then informs Sangwoo about his cousin visiting his house, to which Sangwoo responds with confusion. When Sangwoo returns home, he finds Bum having discovered the tied, bruised up body of a woman Sangwoo kidnapped in his basement and approaches him from behind with a bat. Sangwoo bashes him on the right side of his body with the bat. When Bum tries to crawl away, Sangwoo grabs him by his hoodie and slams him onto the ground. Bum tries to run up the stairs to escape, only to be struck across the calves by the bat. As Sangwoo approaches him with the bat with the intent to murder him, Bum cries out that he fell in love with Sangwoo, telling him that he shared the same class and military with him and how Sangwoo saved him from a rape attempt from his superior in the army, claiming that he didn't intend to annoy him, but was unable to control his feelings. Sangwoo crouches down to Bum and asks for him to stop mumbling and then remakarks that the basement is too small for the girl and Bum. Bum begins to go up the stairs after Sangwoo's suggestion and asks if he is forgiving him. Though he affirms this, Sangwoo shoves him down the stairs to break his legs. While Bum is unconscious, Sangwoo murders the girl he'd previously kept captive after cutting her hair crudely and cutting her across the face. He additionally strips Bum of his clothing and chains his wrists. When Bum awakens, Sangwoo informs him that the girl was the daughter of the CEO of a pharmaceutical company and kept screaming for help from him while he was unconscious. Sangwoo molests and mocks the girl before deducting Bum as an middle aged, unemployed class loser. He addresses Bum's scarred wrists, supposing his father beat him or if it is related to his homosexual tendencies. Sangwoo says that he'd normally kill Bum, a boy, then kill the girl later, but reveals he hasn't murdered a male since the death of his father. He compliments Bum's effeminate frame, liking it to a girl, exempting his hair. He attempts to feed Bum with canned abalone porridge, but Bum is unable to close his agape mouth, to Sangwoo's anger; he proclaims it expensively cost 6000 won and that Bum ought to be grateful for his life being spared. When asked, Bum feebly tells him that it feels good, to which Sangwoo mocks and spills the remaining soup onto his face. Sangwoo then kisses him. Sangwoo learns that Bum's left leg is still functioning and berates him for not telling him, proceeding to break his left leg's ankle with a sledgehammer as "punishment" despite Bum's pleads.