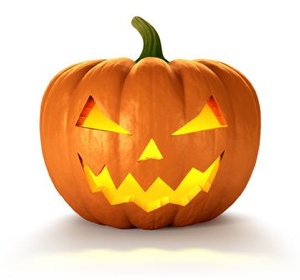 In the night from October 31st to November 1st it will be "scary" again. Ghosts roam the streets, houses are eerily decorated and pumpkin faces glow everywhere. But why do we celebrate Halloween at all and why do we dress up so scary? And what about the pumpkin grimaces?

The name comes from the Catholic "All Saints" festival. This has been celebrated on November 1st for many years. In English, the festival is called "All Hallows" and the evening before, October 31, "All Hallows Evening". The abbreviation for this is Halloween.

Halloween is very popular in the United States. Both children and adults dress up, go door to door to get candy or play pranks. In America this custom is called “Trick or Treat”. Here in Germany, for example, the children say “Trick or Treat”. If the residents don't have sweets on hand, the children may play little pranks on them. The houses are decorated very lavishly and "creepy", especially in the USA, and everywhere you see gruesome, glowing pumpkins.

The festival originally comes from Europe and not from the USA as many believe. Presumably it has its origin in the "Samhain" festival celebrated by the Celts. The celebration represents the end of summer and the beginning of winter - the dark season. The Celts, who lived in Ireland and Scotland many centuries ago, believed that the spirits of the deceased and other unearthly beings visited our world during this time.

Fearing that death was particularly near that night, the Celts dressed up as scary as possible to make him think they had already died. So they wanted to outsmart him so that he wouldn't take her with him. Allegedly, people also placed small gifts in front of their houses in order to appease the spirits who were "visiting" that night.

One of the most popular Halloween customs is to make a Jack-O lantern. This is what they call the hollowed out pumpkins decorated with creepy grimaces. According to an Irish legend, Jack O was a mean villain. When the devil wanted to get Jack O, he outsmarted him to trick him into eternal life. However, the older Jack got, the more he wanted to find eternal peace. But neither paradise nor hell wanted to accept him because of his deeds. The devil gave him a piece of glowing coal from hellfire to take with him. Jack put this in a hollowed out turnip. From then on Jack wandered through the darkness with the turnip lantern. Today, large pumpkins are used instead of beets. The glowing pumpkin faces are supposed to drive away evil spirits and therefore look so scary.