Powhatan is a classic example of an early Georgian plantation mansion. The construction date is uncertain, although it may have been designed by noted architect Richard Taliaferro, who designed several important Virginia plantations includingCarter's GroveotherWilton, his own townhouse in Williamsburg and supervised repairs to the Governor's Palace in 1751. By the time he was working on the Governor's Palace he was known to be living at Powhatan, on land inherited by his wife Elizabeth Eggleston Taliaferro west of Williamsburg. During the mid-18th century Richard Taliaferro undertook the construction of his two-story townhouse on Williamsburg's Palace Green, now known as the Wythe House as it was inherited by his son-in-law George Wythe. It is believed he also built his country house at Powhatan. Powhatan is marked by finely crafted glazed-header Flemish bond brick walls and massive T-shaped chimney stacks. Architecturally, the house at Powhatan relates to the much larger house at nearbyWestover. Both homes have similar proportions and include off-center halls.

Powhatan passed out of the Taliaferro family in 1810. The interior of the house was destroyed by fire during the Civil War, although the Martin family rebuilt shortly thereafter. The Slausson family, who operated a dairy farm on the property during the first half of the 20th century, undertook a restoration of Powhatan in 1948. A 19th-century gable roof was restored to the original steep-pitch hip roof form and colonial-era sash were fabricated to replace the two-over-two sash windows installed after the Civil War. The dwelling remained vacant for more than a decade, until it was integrated into the development of the Powhatan Plantation timeshare resort. The shaded plantation yard and axial approach from the original country road have been sensitively maintained by the resort owners. 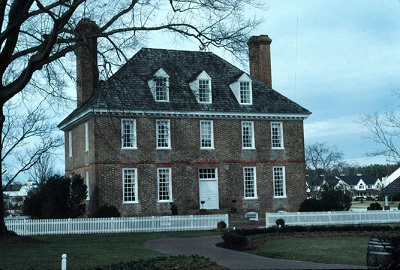