How to Use Hawk White Grout 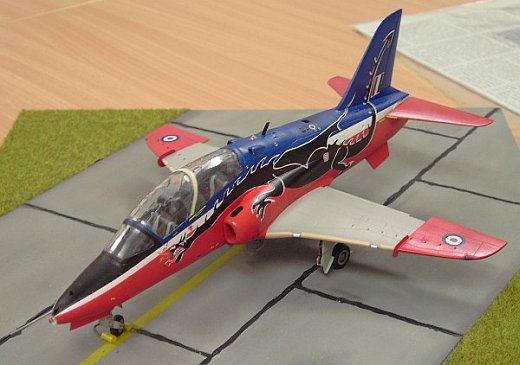 It is the "XX172", which was stationed on the St. Athan Station Flight. Originally this machine flew in the paintwork as it is shown here on the model. This machine was later repainted in black and given a red kite. 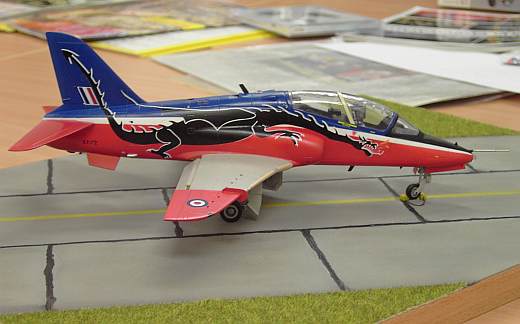 The kit is manufactured by Airfix. The quality can be classified as mediocre. Very rough engravings, wall thicknesses of all parts that are far too thick, which is noticeable at the latest when attaching the landing gear flaps, and the fit of most parts made me come to this conclusion.

In order to get an appealing model, almost every part has to be revised. I didn't invest a lot of time in the cockpit because I wanted to attach the canopy closed. But you shouldn't underestimate how much you can still see afterwards. For example, the ejection seats were supplemented with self-cut belts made of 0.25 mm plastic. 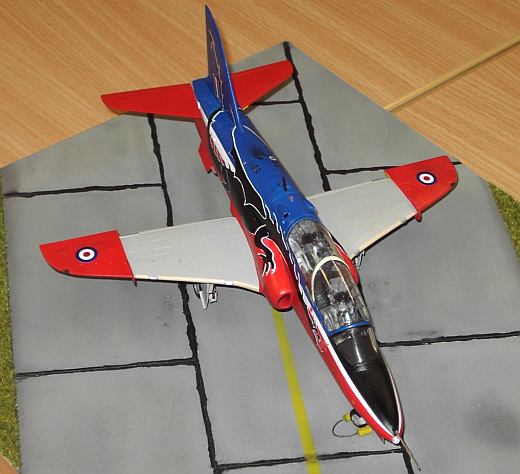 After the cockpit was completed, the two fuselage shells were processed. That means, some engravings were redrawn, rivets and quick-release fasteners were applied. In addition, some quirks (large dents that could have occurred during demolding) had to be sanded away and filled. The rudder was cut off and the linkage for the trim rudder was added.

In addition, the air inlets had to be revised. The shape of the inlets is incorrect and, who would have guessed, a lot of putty work was required to create a perfect transition. Then some openings on the fuselage were drilled or milled out. The fuel discharge tube was attached and an exhaust outlet on the right side.

The landing gear shafts were left in their original condition - which I regret in retrospect. For this, however, the chassis legs were heavily rebuilt: creating the joint, attaching the hydraulic lines, redesigning the swing arm, etc. 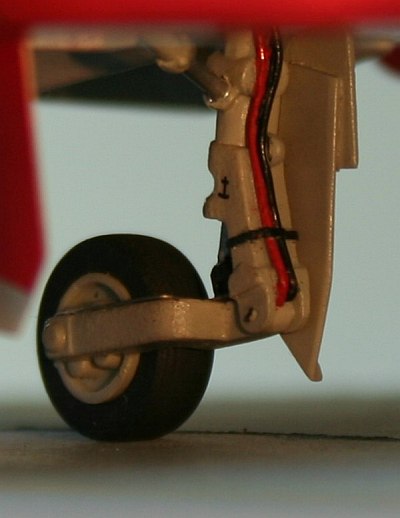 The tires also had to be revised. It was very practical to glue a small axle into the wheel. This axis was clamped in a drilling machine and you can now machine the wheel like on a lathe. After the tires had the correct shape and diameter, a coarse file was pressed against the wheel, the grooves left by the file look like the profile of the tire. 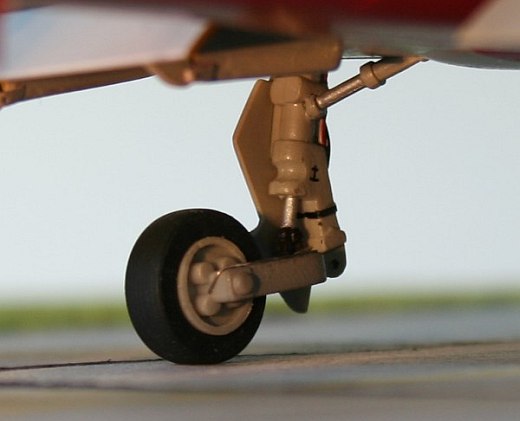 In order, as mentioned in the foreword, to avoid the problem of the wall thickness being too thick, all landing gear doors were rebuilt in-house. 0.25 and 0.5 mm plastic sheets were used. Great emphasis was placed on attention to detail. All rivets were attached and the locking mechanism was made of sheet aluminum and 0.2 mm steel wire. All of this was aged a bit and then the construction of the chassis could be completed. 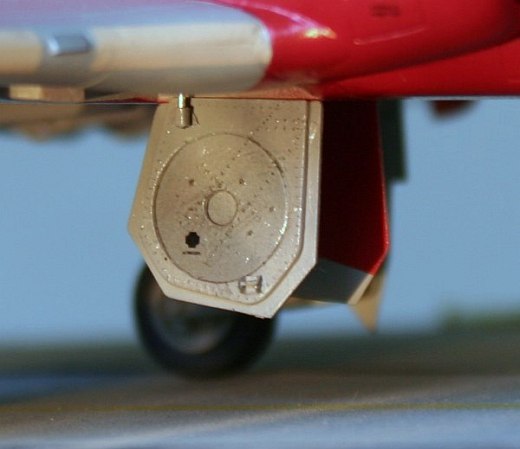 After the two wing halves were glued, the landing flaps were cut out and attached in the extended position. Airfix did not use the intended parts - it was done independently again. The mechanism is designed so that the landing flaps can still be moved after the model has been completed. 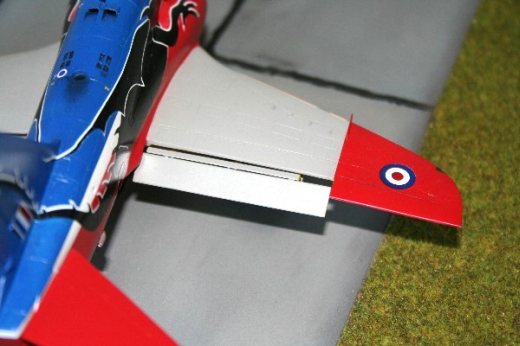 All boundary layer fences on the top of the wing were cut off and the surface sanded. Because the cast-on "lumps" did not give any idea what function they have on the original - so without further ado, 16 new boundary layer fences were cut from 0.25 mm plastic sheet (I know, still too thick - but better than before) and attached with plastic adhesive . In addition, the two large boundary layer fences were recreated in scratch. The silver sheets on the leading edge were also not provided in the kit version. Numerous prototype photos had to be studied in order to find out the exact shape, color and position of these sheets ...

A very positive point to note is that the canopy fit perfectly. It was put in place under slight pressure and glued with thin superglue.

To complete the construction, all the antennas had to be cut. However, due to the risk of breakage, these were only attached after painting. 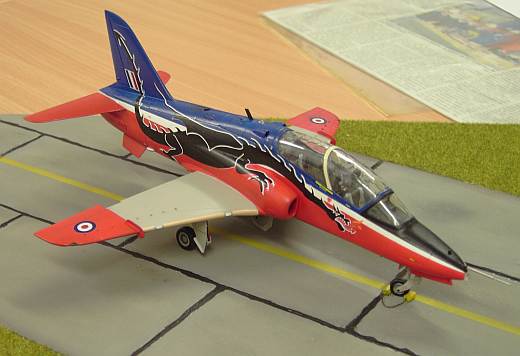 The original is in the colors Roundel Blue, Signal Red, Gloss White and Light Aircraft Gray. But since no ready-mixed colors could be found except for the white and the gray, which also met my requirements, the red and the blue had to be mixed myself. I can't say exactly what took longer, the right mixing of the paint including test spraying, or the complete painting of the model. I said in advance that the painting would only take a week, but far from it. In the end it was three and a half weeks in the paint shop. But the goal was not yet achieved! 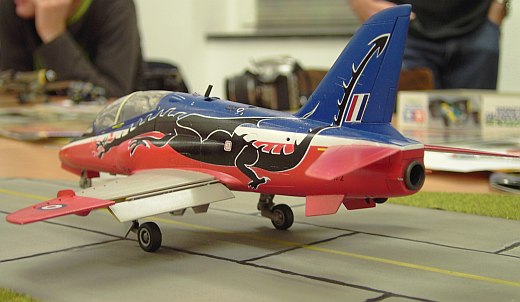 In terms of decals, I decided on the “Dragon Hawk” set (MAS-489001) from Model Alliance Decals. Here, too, the quality can be classified as mediocre to poor. But here no hasty conclusions can be drawn about the quality of the decals from Model Alliance, because the phrase “RAF BAe Hawk Stencils” (MA-48116) was also used, which is to be distinguished with the predicate “valuable”.

When the dragon decals softened, the complete adhesive did not seem to come off and left small, white lumps that could hardly be removed without damaging the decal. Maybe I just caught a "Monday print" ...

I had no choice but to mask the kite after it was applied and paint over the (usually transparent) protruding edges with the adhesive residue in the hull color. 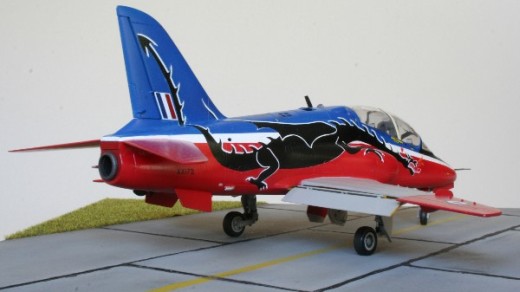 It was planned that the construction of the Hawk should be completed in three to four weeks, but my schedule was totally blown by all the improvement measures and it was not possible to finish the model by the planned exhibition. Then it was in the shell and partly primed in the background. And now it is waiting to be "parked" at the front of the next exhibition ...